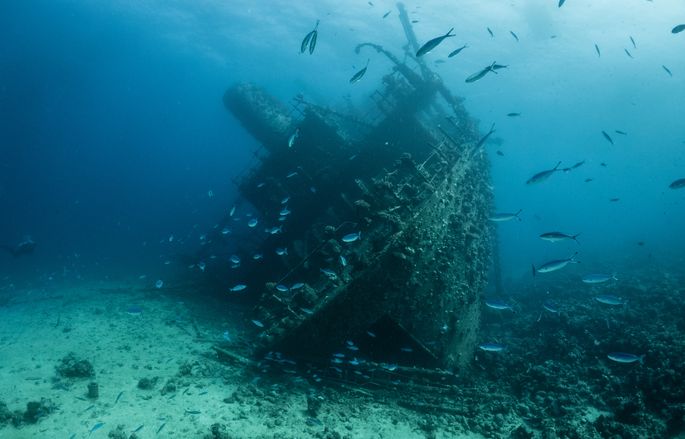 The SS Thistlegorm is probably the most famous wreck in the Red Sea. The British cargo ship was on its way to bring military equipment of all kinds for the British troops in North Africa. But then on the 6th of October 1941 a German bomber attacked the Thistlegorm. The wreck is lying upright on the sea-bottom at 32m depth. Especially interesting is the cargo: Tanks, trucks, motorcycles, weapons, railway carriage and two railway engines.

The reef at Abu Nuhas is famous for wrecks. There are 4 wrecks, which are today an attraction point for divers all around the world. For example the Greek cargo ship GIANNIS D, which ran aground the reef on 19th April 1984 and sank a short time afterwards. It is now lying in a maximum depth of 27 m and is overgrown with hard- and soft corals. The ship cracked down in the middle. The better part of the two halves is the stern section. Here it is easy to dive inside the wreck, because there are a lot of entry and exit points. Because the wreck is leaning on a 45° angle you will find yourself swimming up a stairwell which your mind tells you are heading down. This effect is very special. The steamship CARNATIC struck the reef in September 1869. She sank the following day as the weather worsened. She lies in about 26m depths. She has broken up amidships, leaving her bow and stern intact. The decking has fallen away to be replaced by a thick growth of tube sponges, alcyonarians and occasional table corals, making her very photogenic. She is also laid open to light from above and is easily penetrated.

The Dunraven, a steam and sail-powered vessel used to transport spices and timber, ran aground the reef Shaab Mahmoud in April 1876 during a voyage from Bombay to Newcastle and sank quickly. The ship broke in two, and her two halves came to rest on the sea floor. The wreck lies upside down with the stern at a depth of 28m and the bow at 18m. At the stern you find the propeller and the rudder, which are overgrown with corals. Inside the wreck you see thousands of glassfish.

The marine park Ras Mohammed offers dreamlike diving spots. For example SHARK REEF and JOLANDA RREF. Both reefs are standing on a plateau, which is between 10m to 20m deep. The edges of the plateau fall down to more than 200m. At the reef you will find nice hard and soft corals, plenty of fish in all kind of sizes. With luck you can see sharks during your early morning dive. At Jolanda Reef you can see the cargo of a Cypriot freighter JOLANDA which ran aground in 1980: a large quantity of household pottery such as toilets, bath and shower tubes, bidets…

This is a sample of the type of itinerary for this area of the Red Sea and the planned dive sites and proposed route cannot be guaranteed. The weather can effect all the dives sites and the itinerary, final route and the decision to dive is at the absolute discretion of the captain and the dive guides

GET 20% OFF ON NEXT VACATION

ONLY FOR OUR GOLD LEVEL USERS